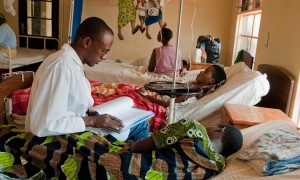 Among the first things that come to mind when thinking of Rwanda is probably the 1994 genocide that destroyed much of the country’s socio-economic and health infrastructures, the scarce resources and overall intense poverty. It is one of the Sub-Saharan African countries that are rarely mentioned, if not entirely forgotten, in our daily lives in Egypt. One thing, however, that should make it particularly memorable, is that it has, despite prior despair and devastation, already beaten us in the pursuit of adequate health care for all of its citizens.

Recent years have marked the rebirth of Rwanda after a transition out of strife and civil war, which, among others, led to the displacement of millions of people, close to a million deaths, numerous orphaned children, increase in HIV/AIDS prevalence and overall loss of human resources. Catalyzed by international aid, the Rwandan government managed to carry out wide-ranging reforms and scale-up that are framed by a policy of decentralization and community participation [1, 2].

By encouraging community participation, potential beneficiaries become involved the decision-making process. This entails defining priorities and resource allocation, planning, implementation and evaluation, by which citizens are empowered to occupy an active role in the transformation of their society. The main objectives of adopting this concept include enhancing responsiveness, sustainability and efficiency of services [3].

In the health context, this decentralization has considerably contributed to the amelioration of the population’s health, marked by its health indicators being among the best in the region [2]. By 2010, 91% of the Rwandan population was voluntarily insured through its largest community-based insurance scheme. This is mainly composed of the social health insurance program called “Mutuelles de Santé”, only introduced in 2004. Premium category is determined according to Rwanda’s socioeconomic assessment system and lie at around $6 per family member with an additional pay of 10% of the service fee upon each visit to a healthcare facility [4, 5].

In 2015, more than 97% of Rwanda’s infants were vaccinated against ten different diseases; an approximate 69% of births took place in health facilities in attendance of a trained clinician. Also, premature mortality declined by over 60% while life expectancy nearly doubled since the 1994 genocide [5, 6, 7].

Regarding the AIDS problem, today over 200,000 Rwandan individuals, or 92% of those living with HIV, are receiving care and support. This number is a striking contrast to the 50% in HIV care in the United States as an example [2, 8]. Before 2002, less than 100 people were administered antiretroviral therapy, whereas now the number has reached over 150,000 patients [2]. Consequently, deaths from HIV have plummeted, also those caused by malaria and tuberculosis, all by about 80% [6].

Even though the health status has notably improved over the last decade, the repercussions of the war and genocide have been grave so there remains a lot of work to be done. However, the pace at which progress occurred is impressive, largely thanks to policies that are built on the participation of citizens.

Maybe Egypt with its much more robust infrastructure can learn something out of the Rwanda fast rise one day.